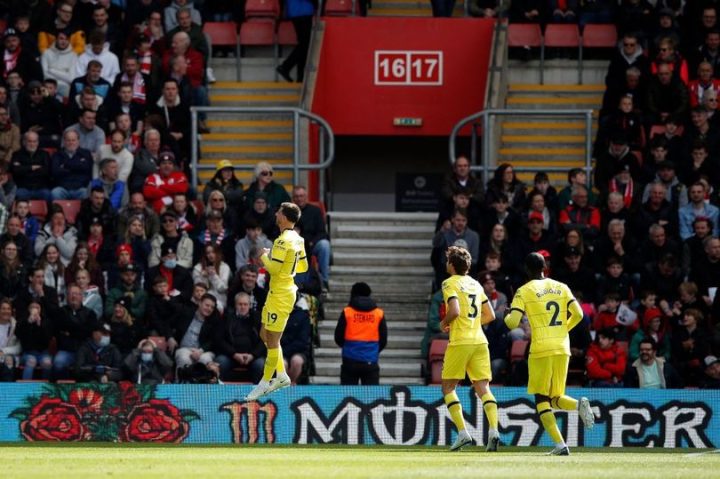 It was another afternoon to forget for Southampton as they lost 6-0 against Chelsea at St Mary’s.

A poor defensive display from the hosts contributed to a one-sided scoreline, with Chelsea boss Thomas Tuchel getting the response he wanted from his players after back-to-back defeats against Brentford and Real Madrid.

After Marcos Alonso’s opener for the visitors, Mason Mount, Timo Werner and Kai Havertz got in on the act to make it 4-0 inside 35 minutes on the south coast.

Werner and Mount then added further goals in the second half as Chelsea ran out comfortable winners, with Saints left to reflect on another embarrassing defeat at St Mary’s.

And here are some of the talking points from the game as Southampton found themselves on the wrong end of another heavy defeat in the Premier League.

Not for the first time Portsmouth-born Mason Mount scored against Southampton. In fact, this was his third goal in three games for the Blues at St Mary’s.

It was a fine arrowed strike into the bottom corner of the goal, leaving Fraser Forster no chance in the Saints goal. But he was afforded far too much time and space outside the box to line up his shot and find the corner, with Southampton’s defenders not getting close enough to the midfielder.

Unsurprisingly, he was happy to get on the scoresheet again as he netted his first goal in seven games for club and country. And he celebrated with a gesture towards the Southampton fans, putting his finger to his mouth to silence the home fans as the Portsmouth fan relished the moment.

With the Blues in cruise control after scoring a fourth goal inside 35 minutes at St Mary’s, there was little surprise that Chelsea’s travelling supporters were enjoying their day in the sun on the south coast.

Southampton fans, not so much, with several Saints supporters making an early exit towards the concourse for half time, leading to a chorus of ‘Oh when the Saints go marching out’ from the visiting crowd.

More than half of St Mary’s was stunned, but the Chelsea fans were keen to delight in the misfortune of the home faithful.

While Chelsea were good, Southampton contributed to their own downfall with a very poor defensive showing.

From standing off their opponents to giving the ball away cheaply, Ralph Hasenhuttl was left shaking his head at times on the touchline at some of the play from his side.

Jan Bednarek and Mohammed Salisu did not handle the pace of Werner well, and Chelsea pounced on every mistake, punishing Saints to leave the St Mary’s faithful shocked and the visiting fans jubilant.