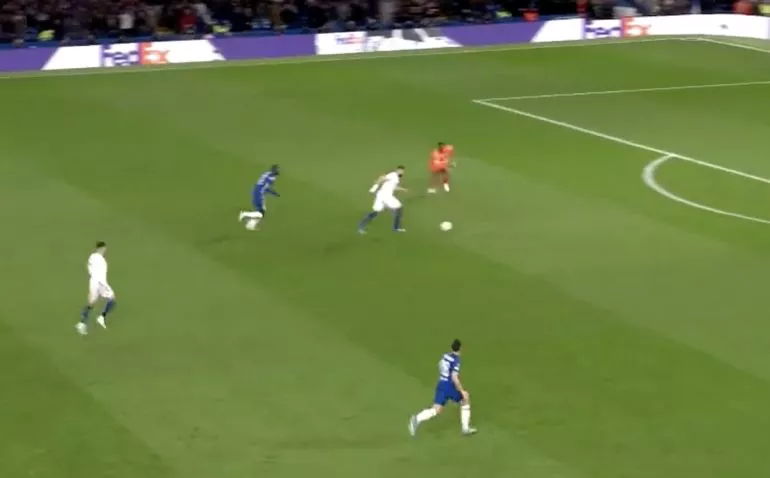 The Frenchman was unplayable in the opening 45 minutes as he scored two brilliant headers.

He opened the scoring in the 21st minute before doubling his side’s lead three minutes later.

Chelsea reduced the deficit just before half-time through Kai Havertz.

But Real restored their two-goal advantage and Benzema completed his hat-trick just after the break.

And it came after a rare howler from Chelsea’s brilliant goalkeeper, Edouard Mendy.

A ball was punted forward and Mendy came some 40 yards out of his goal to retrieve it.

Mendy was under pressure from Benzema and he couldn’t afford to get his pass to Antonio Rudiger wrong.

Mendy didn’t get enough power on his pass, Benzema beat Rudiger to the ball and then finished into an empty net.

Watch the moment below…

The worst possible start to the second half for Chelsea… 😔

A terrible defensive mix up between Édouard Mendy and Antonio Rüdiger allows a tap in for Real Madrid's star man ⚽️#UCL pic.twitter.com/GJDtp3IM6u

What a blunder by Mendy.

Rudiger isn’t blameless, either. He should have done much better in his 50/50.

But Mendy should really have booted the ball back up field. He took a risk in playing the ball to Rudiger but he did not get his pass right.

Mendy has been so reliable since signing for Chelsea and is one of the best goalkeepers in the world.

But his mistake was a real shocker. There’s still a long way to go in the tie but Mendy’s mistake could prove costly.