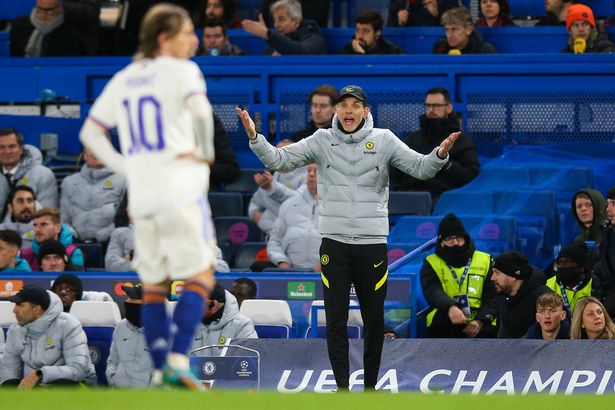 Robbie Savage believes the roots of Chelsea’s defensive wobble go back to wing-backs Ben Chilwell and Reece James being crocked.

The Blues have suffered damaging back-to-back defeats at Stamford Bridge, with a shock 4-1 home loss against Brentford followed by Real Madrid’s 3-1 heist in the Champions League quarter-final first leg. Chelsea were top of the table until December, when they were beaten 3-2 at West Ham – 10 days after Chilwell’s cruciate ligament knee injury wrecked his season.

And since James missed two months of the campaign after suffering a hamstring injury in the 1-1 draw with Brighton in Christmas week, their league form has been patchy – 18 points from a possible 30. The European Cup holders looked all at sea defensively as Karim Benzema’s hat-trick for Real Madrid left them staring at the end of their reign on Wednesday night.

Mirror Sport columnist Savage observed: “After two home defeats in five days, shipping seven goals in the process, their aura of defensive structure and discipline has suddenly evaporated. After 12 games, they were top of the table and Thomas Tuchel’s side had conceded only four goals.

“And before the international break, Chelsea looked nailed-on to finish third behind Manchester City and Liverpool. Now, if Arsenal win their game in hand, the Gunners would be only two points behind them.

Chelsea were all at sea against Real Madrid

“In my view, Chelsea’s problems began when James and Chilwell were injured. They are integral to the way Tuchel’s team is set up, and any side would miss players of their quality. But there is now a very real danger that Tuchel will miss out on all the big prizes – title, FA Cup and Champions League – when the medals are being handed out next month.”