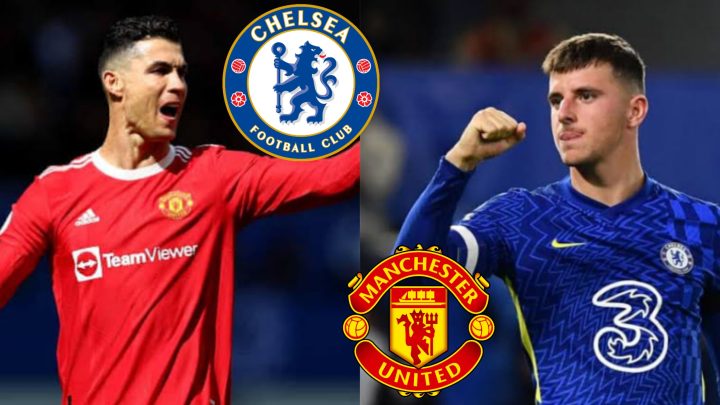 Chelsea midfielder Mason Mount has admitted that Manchester United ace Cristiano Ronaldo had a huge impact on his development as a player in the academy. As a Portsmouth fan, Mount witnessed one of the Portugal international’s most iconic free-kicks and said playing against him was ‘crazy’.

Mount is the latest Chelsea name to be linked with a move away from the club in recent weeks, with The Sun reporting that both Liverpool and Manchester City are considering moves for the England international amid a backdrop of off-field uncertainty at Stamford Bridge.

Antonio Rudiger is set to join Real Madrid on a free transfer at the end of the season after the takeover process scuppered any hope of tying the defender to a new deal, while Reece James has also been linked with the Spanish giants. Thomas Tuchel will be desperate to hold onto Mount, with a huge summer transfer challenge already on his plate. But amid the background of speculation, the 23-year-old gave an interview in which he revealed the influence Cristiano Ronaldo has had on him as a player.

“I think everyone has seen the video of when I was younger basing my free kick off him,” he told Amazon Prime in an interview. “I always watched him very closely when he was at United as a young kid. I loved the way he played, his free kicks.

“I’m a massive Pompey fan, so I went to the game when they played at Old Trafford and he scored that free-kick against David James. I was actually at the game, in the corner so I saw it first hand and I think after that I kind of fell in love with the technique and what he’d done and him as a player.

“So I always try to look at and work out, what can I do, to put it into my game? But now to play against him and be up against him is the journey that you go on from watching someone in the stands as a fan and then to being on the same pitch and playing against them. It’s a crazy journey and yeah, that’s why I love football so much.”