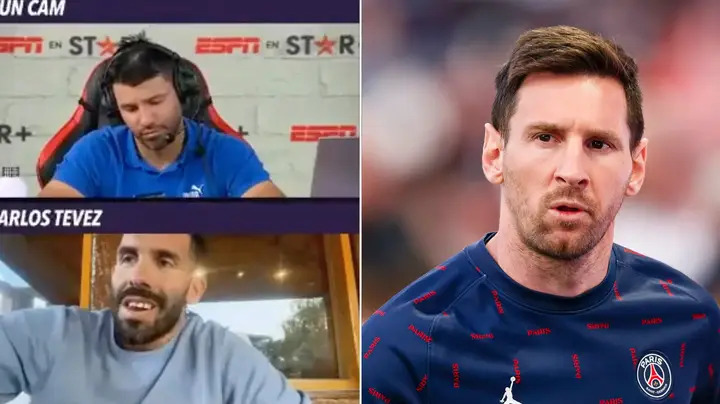 Despite trailing on aggregate coming into the second leg, Real dug deep and managed to clinch a spot in the Champions League final thanks to a late double from Rodrygo in the 90th and 91st minutes.

Karim Benzema then cooly sealed the last-gasp victory from the spot in extra time, confirming Manchester City and Pep Guardiola’s fate with the Spaniard still unable to steer his team to silverware in Europe.

And just like the rest of us watching from home, Aguero and Messi couldn’t quite believe what they were witnessing.

" Stop your stupid banter, that can't be true! pic.twitter.com/XgPmt69ML3

City icon Aguero has now shared a text he received from his fellow compatriot and good friend Messi – and it’s pretty amazing.

Messi may have parted ways with his beloved Barca, but he still clearly hates seeing their arch-rivals win. As for Aguero, judging by his facial expressions on the stream, he didn’t look best pleased either after seeing his former club throw away a place in the Champions League final at the last hurdle.

🎙 Sergio Agüero: "Leo [Messi] sent me a message after Real Madrid's third goal: 'It's a joke, it's not possible’.” #UCL pic.twitter.com/R2tUcnDVfA

For the neutrals, both legs of this semi-final clash were simply box office entertainment.

But for the City faithful, who are desperately crying out for a success on the biggest stage of all, it’s another season where Guardiola has failed to deliver in Europe – as harsh as that may sound.

Even with one hand still on the Premier League title, the Manchester City boss was visibly gutted during his post-match press conference in Madrid.

“I have had defeats in the Champions League, I had tough defeats at Barcelona when we could not reach the final,” Guardiola said.

“But it is tough for us, I cannot deny that. We were so close to the Champions League final.

“We didn’t play well in the first half, we didn’t find our game. The second half was much better and after the goal, we had control.

“We found our game but unfortunately we could not finish. The players gave everything. We were so close.”