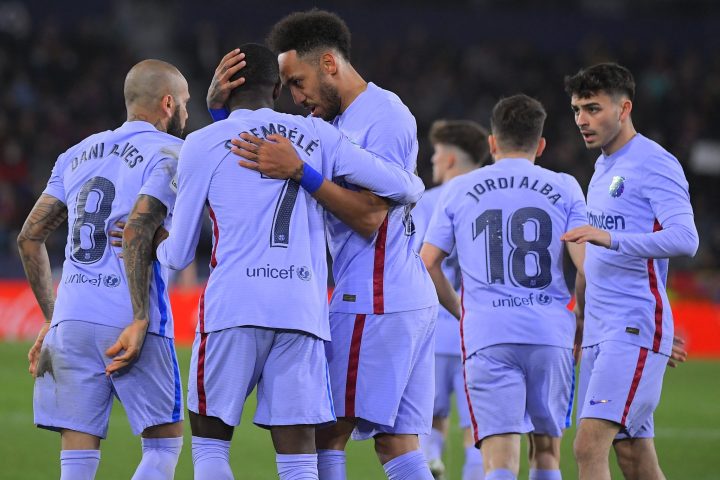 The Catalans continued their eight-game winning streak with a hard-fought win over Levante.

Barcelona defeated Levante 3-2 in their La Liga game on Sunday. The Catalans were far from their best, but a late goal from Luuk de Jong got the job done against the 19th-placed side.

Barca started the game as usual as they dominated the possession inside Levante’s half. However, the hosts did an excellent job of keeping their defensive integrity while creating a few extremely dangerous chances of scoring.

Following a goalless first half, it was Levante who broke the deadlock through a spot-kick in the 52nd minute. The hosts had the chance to double their lead with another penalty only four minutes later. However, this time Roger Marti failed to convert the penalty, keeping Barca’s hopes for a comeback alive.

It did not take long after the penalty miss that the Catalans found the back of the net. Pierre-Emerick Aubameyang scored a brilliant header to make it 1-1 just before the hour-mark.

The Catalans went ahead through Pedri’s strike into the bottom corner of the net only four minutes later. It seemed that Barca were on their way to clinching an easy draw, but then came the hosts’ third penalty of the night.

Gonzalo Melero made no mistake and smashed the ball past Marc-Andre Ter Stegen into the bottom-left corner. Seeing their lead vanish in the 83rd minute, Barca went all-in with their attacks in the final stages of the game.

Xavi Hernandez’s side finally clinched the match-winner through Luuk de Jong in the 92nd minute. Following a perfect cross from Jordi Alba, the Ducthamn flew above the Levante defenders and scored Barca’s third goal of the night.

Xavi’s Barcelona are on a STREAK 🔥 pic.twitter.com/mvAMZQEozw

What’s next for Barcelona?

Barcelona maintain their second place on the league table, being above Sevilla with a better goal difference. The Catalans will now prepare for the second leg of their Europa League quarter-final tie against Eintracht Frankfurt.

Following a 1-1 draw in the first leg, the two sides will meet again at Camp Nou on Thursday.