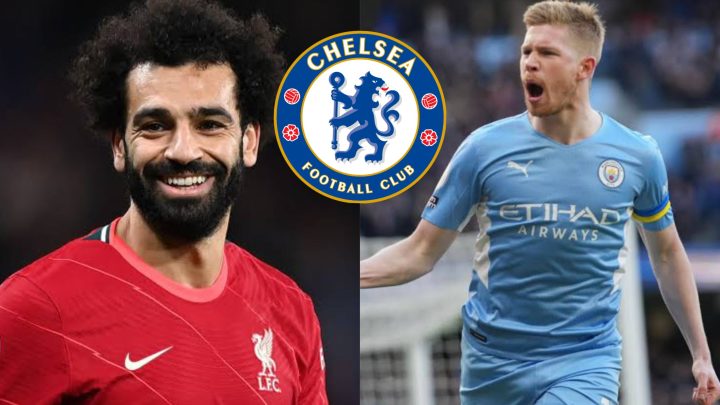 Manchester City maestro Kevin De Bruyne has revealed why both he and Mohamed Salah had to leave Chelsea during their unsuccessful stints at Stamford Bridge.

Just one point separates City and Liverpool heading into their mammoth clash on Sunday, with both Jurgen Klopp and Pep Guardiola chasing down the Premier League title.Thomas Tuchel will have been hopeful of being among the race but his side have stuttered in the league while others have thrived.

Two of the Premier League’s best players will be on display when the game gets underway at the Etihad on Sunday. Both De Bruyne and Salah are viewed as two of the world’s finest talents but both were let go by Chelsea under Jose Mourinho.

De Bruyne was sold to Wolfsburg for just £18 million while Salah was allowed to leave for first Fiorentina on loan and then Roma before moving to the Stadio Olimpico permanently for just £12 million.

After Chelsea lost 1-0 to Guardiola’s men back in January, Tuchel piled praise onto the matchwinner De Bruyne, saying: “The individual quality of Kevin De Bruyne made the difference. We struggled offensively to show the type of quality to really hurt them and score the first goal and bring some doubts into their game.”

Now, the 30-year-old has had his own say on the situation. The decisions of Chelsea to sell both De Bruyne and Salah have gone down in football infamy, frequently mentioned as two of the worst transfer decisions of all time. But the City talisman insists that both players had to leave.

“We were just two good players who didn’t play a lot,” he said in an interview with Metro. “We both needed to gain confidence and get game time and we had to go elsewhere to do that.

“Maybe it was just a coincidence. You certainly can’t compare me now to what I did then – ten years in football is your whole life.”