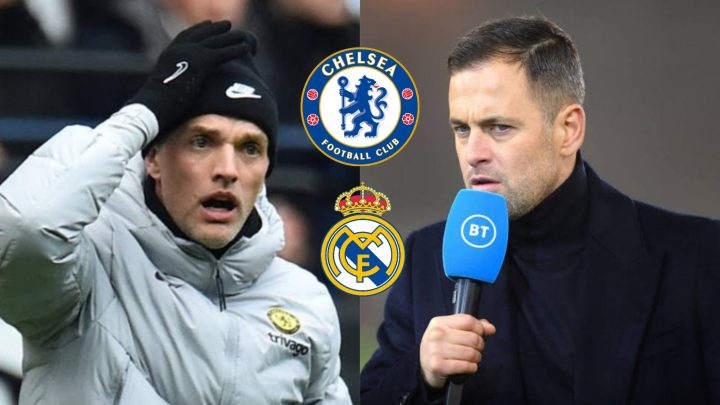 Joe Cole singled out Edouard Mendy and Antonio Rudiger for criticism after Chelsea’s 3-1 loss to Real Madrid on Wednesday. Mendy and Rudiger were at fault for Karim Benzema’s and Real’s third goal in the first leg of the quarter-final tie at Stamford Bridge.

Benzema scored two with his head in the first half before Kai Havertz pulled one back for the hosts with a header of his own. But Chelsea made a costly mistake straight after half-time to gift Benzema his hat-trick.

After making two substitutions at the break, Real re-established their two-goal advantage. Goalkeeper Mendy collected the ball over 30 yards out from his goal.

The Senegal star attempted to play the ball to Rudiger but his pass was underhit. Rudiger did not go full throttle into the tackle with Benzema and the Frenchman won the ball, before stroking into the open goal.

Cole insists the tie is not over yet despite Real holding on to win 3-1. But he admits Chelsea cannot afford to make mistakes like they did.

Speaking on BT Sport after the match, Cole said: “The next goal in the tie is crucial. It’s a huge ask to go to Spain and overturn a 3-1 deficit.

“Tuchel changed it at half-time, went to a back four and looked a lot brighter and sharper. One thing you can’t account for is individual mistakes. Rudiger and Mendy got it wrong.

“Benzema, outstanding and gives them a good advantage next week. The tie isn’t over though.”

Former Real winger Steve McManaman also said the error was inexcusable from the Chelsea duo. He says Chelsea made it easy for Real by handing them the third goal.

McManaman said: “Sometimes it’s not the teams that score the most goals, it’s the team that make the least amount of mistakes that win competitions. Madrid were fantastic tonight, experienced, superstar centre-forward. In these tight games, one mistake or a sending off can change the narrative of the whole game.

“What was 2-1 and a difficult second half for Madrid, became a really easy one in the end. Chelsea didn’t give themselves a chance.

“The fact Madrid have scored three and Benzema should’ve had more says it all. Very unlike Chelsea to make that many errors.”

Chelsea will aim to overturn the first leg deficit at the Bernabeu next Tuesday. The winner will play either Manchester City or Atletico Madrid in the semi-final, with City holding a 1-0 lead following the first leg at the Etihad.