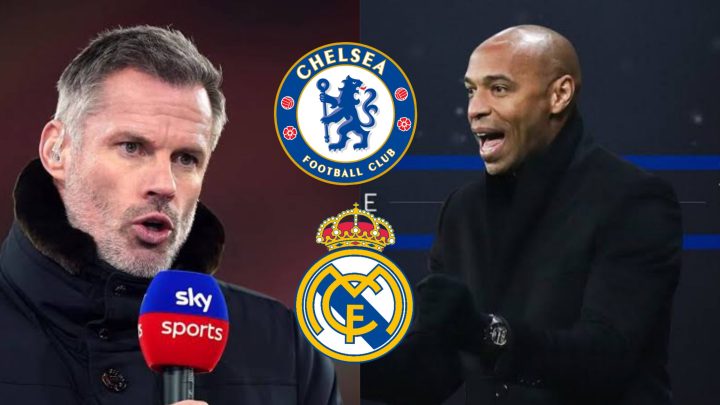 Jamie Carragher and Thierry Henry have delivered their verdicts on Chelsea’s chances of winning the Champions League this season, with Thomas Tuchel eyeing his second title in a row.

The Blues come up against Real Madrid in the first leg of their quarter-final tonight at Stamford Bridge, the side they beat in the semi-finals of last season’s tournament. But having lost 4-1 to Brentford on Saturday, it remains to be seen how they will react against the 13 time winners.

Tuchel is well aware of the threat Carlo Ancelotti’s side will pose. Having won the tournament more than any other side, and recently for three seasons in a row, the Chelsea boss was eager to praise their opponents.

“They won it three times [in a row] this competition and it’s an incredibly hard tournament to win and they did it three times,” Tuchel told his pre-match press conference. “They trusted an almost similar squad over a long period of time which was impressive and outstanding. It’s normal that cycles like this change at some point.

“In terms of a winning streak, reaching the final, maybe this is what happened to them. But we should be very aware that teams with this kind of experience, flair and quality can produce special performances on special occasions.

“For us, it’s also a special occasion – we play Real Madrid in a quarter-final. So that’s why we feel pretty excited. We don’t lose too much sleep thinking about where they are. We want to prove a point to ourselves tomorrow. That’s the target. The occasion is special and the opponent is special. That is why we are excited.”

The crew give their #UCL brackets and @Carra23 is mad. 😡 pic.twitter.com/2vYSHqxvay

But even if the Blues make it past Madrid, neither Carragher or Henry have predicted them to go the distance for a second season in a row. The Arsenal legend has predicted Madrid to get the better of Chelsea and for Manchester City to pip Liverpool to the title in another all-English final.

Carragher was on hand in the studio to “No doubt Chelsea will get through [against Real Madrid]. Man City, not a problem [against Atletico Madrid]. Bayern will do it. Liverpool, not a problem. This game [with Benfica] will be over tonight. We then get to the final. Liverpool, Manchester City and Liverpool will win on penalties.”