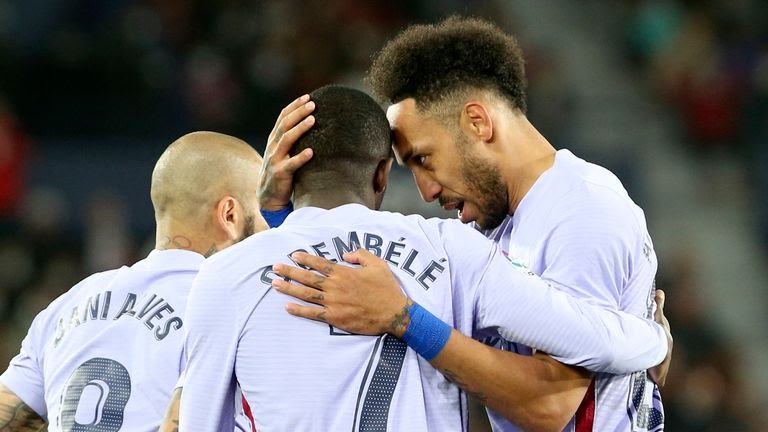 The Frenchman was in fine form on Sunday once more, and a team-mate hopes he chooses to stay at Camp Nou

Ousmane Dembele must stay with Barcelona, says Pierre-Emerick Aubameyang, who spoke of the Frenchman’s impact after the Blaugrana emerged as 3-2 winners against Levante in La Liga on Sunday.

The Catalan outfit fought back from behind to seize the lead through the latter, lost it again to a third penalty for their hosts and then snatched the win in injury time through Luuk de Jong’s effort.

It marked another impressive turn for Dembele however, who as recently as January looked set to become a Camp Nou outcast – and now Aubameyang, who bagged Barcelona’s first goal, says that he should renew past this year rather than move onto new pastures.

One goal in seven games: Why Salah’s slump is concerning for Klopp, Liverpool and Man City

“Ousmane knows me well,” the Gabon star told Movistar+. “I have to always be prepared when he goes to the right.

“It’s normal for people to be aware of me. I can do much more. In the first half I didn’t play well. We have to [show] a little more intensity.

“I think today we lowered the intensity, especially in the first half. We improved in the second half. [But] Dembele has to stay!”

On an eventful night that saw Barcelona concede three penalties across the second half, it was the combination of two of their most promising young talents in Pedri and Gavi that put them in front for the first time after Aubameyang had squared things up at 1-1.

The forward remains impressed with the duo, adding: “Pedri and Gavi have done very well. We trust the whole group. Those who have entered have scored goals. It was a very difficult match.”

On the spate of spot-kicks, the attacker demurred on a direct answer, instead stating: “I haven’t seen the penalties well. When the referee blows the whistle you can’t do anything. We can’t say anything. The most important thing is that we won.”