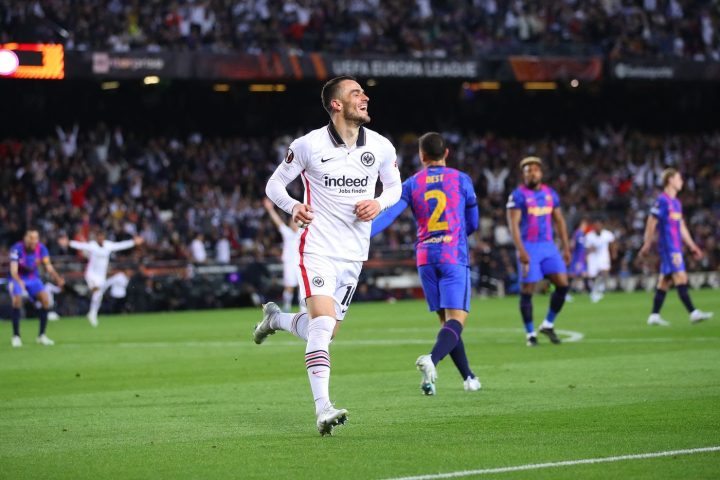 Barcelona were eliminated from the UEFA Europa League on Thursday night as they lost 2-3 to Bundesliga outfit Eintracht Frankfurt in the quarter-final second leg at Camp Nou.

With the first leg ending in a 1-1 draw, the tie was evenly poised heading into the encounter at Camp Nou. But it was the visitors who made the better start, taking the lead through Filip Kostic’s penalty before Rafael Borre doubled the advantage with a sensational strike.

Kostic made it 3-0 in the second half to all but confirm Frankfurt’s progresion. Barça did mount a late fightback with Sergio Busquets and Memphis Depay scoring, but it was all too little too late for the Blaugrana.

Having been one of the favourites to go all the way in the tournament, Xavi Hernandez & co. ended up crashing out following a performance that left a lot to be desired.

Defender Eric Garcia was the guilty party for the early penalty as he fouled Jesper Lindstrom, which Kostic converted.

The Spaniard spoke to the media after the game, during which he addressed the atmosphere at Camp Nou on the night. The stadium was filled with a large number of Frankfurt supporters than is the norm for an away side, which the defender found strange, like his manager Xavi.

What happened today in the stands is strange and rare, I thank every Barcelona fan who attended today,” Garcia said.

The former Manchester City ace added that the team will now completely focus on finishing the league campaign on a strong note.

“Our goal now is to try and finish La Liga as good as possible,” Garcia added.

The Spanish international had conceded a penalty in the last league game against Levante as well and will be hoping to bounce back strongly when Barça face Cadiz up next on Monday.