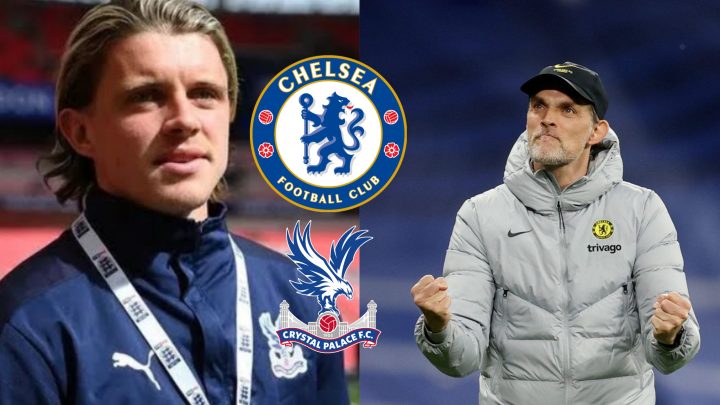 Conor Gallagher has sent Chelsea his well wishes for the FA Cup final after his parent club pipped Crystal Palace in the semi-final at Wembley. The Blues eventually won 2-0 after 65 minutes of cagey action, courtesy of goals from Ruben Loftus-Cheek and Mason Mount.

Gallagher was among those in attendance but the England international was denied the chance to play due to the terms of his loan.

The deal means he is not allowed to feature in any competitive matches against Chelsea this season, including cup competitions.

Palace even submitted a cheeky request to play him in the fixture that was turned down by the European champions.

Yet despite being on the losing side and being denied the chance to play in the final, Gallagher was more than happy to congratulate Chelsea and the players he’s set to link back up with this summer.

He said in praise of Palace: “Amazing achievement for the club playing at Wembley today! Wasn’t meant to be. The fans were incredible throughout! Wishing Chelsea all the best in the final.”

Chelsea boss Thomas Tuchel detailed his guilt at blocking Palace’s Gallagher request and revealed he bumped into his player in a restaurant following the draw.

“I had the chance to speak to Conor. I could see his frustration. We met some weeks ago by coincidence in a restaurant,” Tuchel said ahead of the match.

“The subject came up, I apologised because I know how competitive he is. We play to win the game.”

Chelsea will now play Liverpool in the final in mid-May as the Blues plot revenge following their penalty-shootout defeat to the Reds in the Carabao Cup final.

Jody Morris, who knows Gallagher well having worked for the club, has warned his old side that there will be plenty of takers for the attacking midfielder if they do not offer him regular football next season.

He said: “A lot of Chelsea fans won’t like me saying this, but if you’re Conor Gallagher and you’re looking at your future, you’re thinking, ‘no one is guaranteed to play week-in, week-out at Chelsea.’

“Conor would want to know that the manager believes in him and is willing to give him an opportunity to showcase his talent in the first team.

“And, let me tell you, there would be a lot of takers, and I’m talking about serious takers throughout Europe, who’ll be keeping an eye on his situation

“He’s certainly put himself in the shop window.”

Gallagher has now impressed in each of his four loan spells away from Chelsea with Charlton, Swansea, West Brom and now Palace.