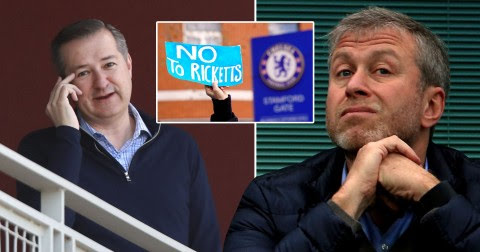 The Ricketts Family have confirmed they have withdrawn their offer to purchase Chelsea Football Club. The controversial investors are no longer in the run-in to buy the club after mass protests regarding the possibility of them taking over.

The family released a statement to PA Sport: “The Ricketts-Griffin-Gilbert group has decided, after careful consideration, not to submit a final bid for Chelsea FC. In the process of finalising the proposal, it became increasingly clear that certain issues could not be addressed, given the unusual dynamics around the sales process.

“We have great admiration for Chelsea FC and its fans, and we wish the new owners well.”

So, the Chicago Cubs owners have opted not to submit a final offer for the club. The consortium members, including US billionaires Ken Griffin and Dan Gilbert, we’re unable to agree on the final ingredients of the offer.

This will be good news to a large section of Chelsea supporters, who protested outside Stamford Bridge prior to the recent defeat to Brentford, the Ricketts family possibly buying the club.

Chelsea head coach Thomas Tuchel was asked about the ownership situation on Friday morning and whether he had an update following Thursday’s deadline for bids. Tuchel replied: “To be honest, no.

“It is still a process. I heard talks are still ongoing with the government. I am still not involved, which I am glad about, I have to say, because we have a lot to focus on here.

“This is where our focus goes. Like I said with the first answer, I hope things will be sorted out as soon as possible to have clarity, but I understand it is not that easy.”