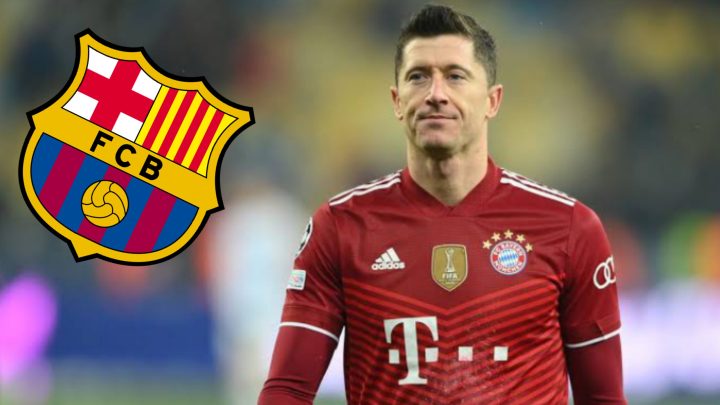 Barcelona are eyeing a summer transfer deal for Robert Lewandowski. The Poland international’s future at Bayern Munich is currently up in the air, with the veteran yet to pen a new contract. And talk of a move to the Nou Camp is now gathering momentum.

In an ideal world, Barcelona would be among the teams at the front of the queue for Borussia Dortmund’s Erling Haaland.

However, with the financial demands for the Norway international way too high, they’re now looking at other targets instead.

Barcelona want a marketable No 9 to fill the void left by Lionel Messi’s summer departure to Ligue 1 side Paris Saint-Germain.

And Lewandowski, it seems, is their top target.

The Bayern star continues to improve as he enters the twilight years of his career at the age of 33, having bagged 47 goals across all competitions already.

So, with the No 9 shirt already occupied by Memphis Depay at Barcelona, Express Sport will now take a look at potential shirt numbers he could wear at the Nou Camp.

Lewandowski has previously worn the No 7 shirt at both Borussia Dortmund and for the Poland national team.

And with Ousmane Dembele potentially primed to leave Catalonia this summer, it’s possible it will soon be vacant.

That’s where the 33-year-old can come in, with Lewandowski certainly a player worthy of such a jersey.

Adam Traore currently sports the No 11 at Barcelona, having joined from Wolves on loan in January.

Yet it’s unclear if the La Liga giants will land the Spain international on a permanent basis given how he’s blown hot and cold so far.

Therefore, it’s possible Lewandowski will be able to take the No 11 shirt if he ends up moving to Barcelona at the end of the season.

Martin Braithwaite has been professional throughout his Barcelona career.

But the Denmark international is expected to be jettisoned come the summer, having struggled for regular action in Catalonia.

If that happens, Lewandowski may then rock up and take the No 12 shirt – even if it’s not the most-exciting option.

The No 14 shirt is special at Barcelona due to the fact it was worn by Johan Cruyff during his playing days there.

And while it’s occupied by youngster Nico Gonzalez, Lewandowski would be a worthy occupier.

Philippe Coutinho donned the jersey prior to joining Aston Villa on loan but it’s hard to see the Brazil international getting a second chance at Barcelona.

Barcelona handed Sergio Aguero the No 19 shirt when he moved on a free transfer from Manchester City.

However, the Argentina international was forced to retire due to a heart condition.

Ferran Torres has since taken the jersey but the former City star could switch himself in order to give Lewandowski a No 9 on his back.

For the same reason as the No 19, the No 29 shirt may appeal to Lewandowski.

And the fact it’s currently available at Barcelona is another factor to consider, too.

Bayern chief Oliver Kahn, meanwhile, was adamant Lewandowski wouldn’t be allowed to leave when quizzed on the matter in midweek.

“We definitely have Robert with us for another season,” said the former goalkeeper.

“We know what we have in him and we’re relaxed about it.

“Apparently, there’s a competition out there: ‘’Who will tell the biggest nonsense story about Robert Lewandowski?’’ Talks will continue.

“We are not crazy and we will not be discussing the transfer of a player who scores between 30 and 40 goals with us every season.”