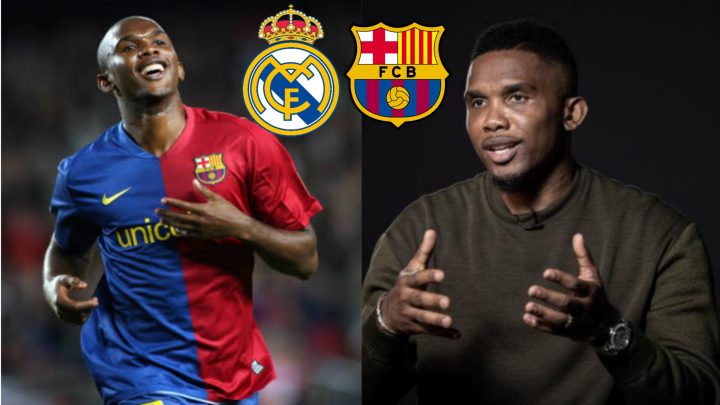 The dramatic nature of the match left Real Madrid boss Carlo Ancelotti clearly emotional on the sidelines as his side continued their remarkable run in the competition while his counterpart Pep Guardiola was left to rue Man City’s capitulation and failure to reach the final when it was within their grasp.

Eto’o was a central striker during the first two seasons of Guardiola’s coaching tenure at Barcelona, before he was sold to Inter in the summer of 2009. By that stage, the Cameroonian had netted an impressive 130 goals across five seasons at the Camp Nou in a spell that encompassed 199 first-team appearances.

Forming a key part of a formidable attacking including Ronaldinho and then Lionel Messi, he is one of the player’s most iconic in that spell of Barca dominance both domestically and in Europe.

Yet Eto’o is one of a relatively small number of players who have played on each side of the divide in El Clasico. He joined Real Madrid in 1996 from the Cameroonian Kadji Sports Academy – although he only ever made seven first-team appearances for the Spanish capital club and never scored a senior goal.

The striker had successive loan spells away from Madrid at Leganes, Espanyol and Real Mallorca, whom he eventually joined permanently in 2000 – where he blossomed into one of Spanish football’s stars with 70 goals in four-and-a-half seasons. He remained at the island club until 2004, when he made his key-note move to Barcelona.

In this context it was surprising that Eto’o posted on his Instagram account on Wednesday night, alongside a photo of the celebrating Real Madrid players: “Bravo @realmadrid, the club where it all started for me, on their impressive victory last night #ChampionsLeague”

After leaving Barca, Eto’o went on to win another Champions League title at Inter – with whom he bagged 53 goals in two seasons – before three seasons at Russian side Anzhi Makhachkala.

He went on to have spells with Chelsea, Everton, Sampdoria, Antalyaspor and Konyaspor, before finishing his career with Qatar SC in 2019. Eto’o also scored 56 goals in 118 international caps for Cameroon – with whom he won two Africa Cup of Nations titles and an Olympic gold medal.