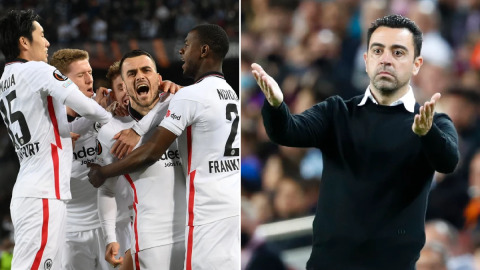 Barcelona saw their hopes of Europa League glory ended by Eintracht Frankfurt on Thursday night with the Bundesliga side winning 3-2 on a dramatic evening at the Nou Camp. Xavi’s side had gone into the match as favourites to go through, having earned a 1-1 draw in Germany. However, they instead slumped to a crushing defeat – with four players particularly bad.

Barcelona hadn’t been at their best against Frankfurt in the first leg, despite their improvement since Xavi replaced Ronald Koeman back in November.

Ferran Torres’ goal had given them hope of going through, however, with the Spain international netting after Ansgar Knauff had opened the scoring in Germany.

Barcelona headed into the return fixture on a high after edging their way past Levante over the weekend.

Yet Frankfurt turned on the style to book their place in the semi-finals of the competition.

Filipe Kostic bagged a brace and Rafael Borre was also on target as they stunned the Nou Camp into silence.

And while Barcelona pulled goals back from Sergio Busquets and Memphis Depay, they still crashed out of the competition.

Nobody in Xavi’s team covered themselves in glory on the night, with Barcelona comprehensively outplayed by their Bundesliga counterparts.

And four players were particularly woeful on the night.

Oscar Mingueza was picked over Sergino Dest at right-back, with the Spain international given the task of keeping Frankfurt’s speedy frontline quiet.

Yet he endured a horrendous night, struggling to contain Kostic and regularly giving the ball away.

It was no surprise to see Mingueza come off and Dest come on, with the Dutchman doing far better despite only being on the pitch for a short time.

Eric Garcia was picked to play alongside Ronald Araujo at centre-back.

And though Araujo’s decision-making was questionable, it was the former Manchester City star who was particularly dire.

Garcia gave away a penalty which Kostic scored and that appeared to damage his confidence as the game went on.

Jordi Alba is one of the disciples of better days the club enjoyed under the likes of Luis Enrique, who recently turned down Manchester United.

But the veteran’s powers, based on this display, appear to be waning.

Alba couldn’t contain Knauff and Jesper Windstorm down the left wing and the former Valencia star may now suffer a few sleepless nights as a result.

And another underperformer for Barcelona on the night was Pierre-Emerick Aubameyang.

Make no mistake about it, Aubameyang has been nothing short of exceptional since joining from Arsenal back in the January transfer window.

However, this was certainly a night for the Gabon international to forget after he was brought off on 60 minutes.

Aubameyang looked lost up top for Barcelona and missed a sitter when they still had a chance to earn something from the game.

The 32-year-old, according to Joan Laporta, will be the Catalan giants’ first-choice striker next season as well.

But Aubameyang will have to do better than this if he’s to show why Barcelona were so happy to gamble on him back in the New Year.

Meanwhile, as many as 30,000 Frankfurt fans were allowed at the Nou Camp after a ticketing mix-up.

And Xavi complained about this issue in the aftermath of the game, saying: “The atmosphere has not helped us.

“It seemed like a final with divided fans. The club is checking what has happened, it has been a miscalculation on our part.

Xavi also lauded Frankfurt, saying: “We haven’t known how to attack well, we haven’t played like in other games. It’s a very big disappointment.

“I would like to congratulate Eintracht Frankfurt because they deserved it.

“The goal for the remainder of the season is to qualify for the Champions League.”